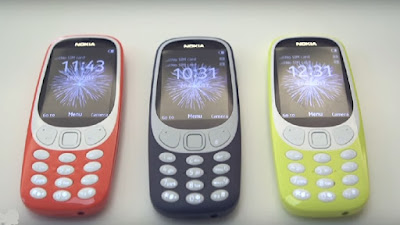 Nokia 3310 (2017) has been announced by HMD Global and Nokia last month. The new Nokia 3310 is one of the most exciting to debut at the show. HMD Global which a tech company in contract with the Nokia brand has made a number of changes to the new Nokia 3310 including addition of a 2MP rear camera, Bluetooth connectivity, and an overhauled Snake game.

It has a 3.5 mm audio connector slot, FM support and an in-built MP3 player. The phone will be available in both Single SIM and dual-SIM.

According to a report by Strategy Analytics, Nokia has managed to capture 9% of the feature phone market and is in second place for 2016. This puts it just behind Samsung, which hzas 13 per cent share.

The report says, Global feature phone shipments reached 396 million units in 2016, and account for 21 per cent of all the mobile phones shipped in the year.

So HMD Global and Nokia might have something on their hands by launching their feature phone classic which is the new Nokia 3310.

– There is a lot of speculation about the Nokia 3310 device running on Android. The Nokia 3310 is not a smartphone. It is loaded with the Nokia Series 30+, which makes it a feature phone.

– The rugged build quality as well as the month-long standby battery life makes the Nokia 3310 a perfect secondary device, for situation when you likely don’t want to be carrying around a smartphone – like a festival.