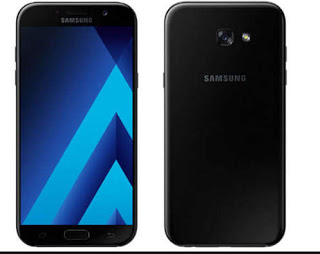 Galaxy A7 is powered by Octa-core 1.9 GHz processor with Exynos 7880 Octa chipset and it accompanies 3GB of RAM. it packs 32GB of in built storage that can be extended up to 256GB by means of microSD card.

Samsung Galaxy A7 comes with Android OS v6.0.1 Marshmallow which is upgradable to v7.0 (Nougat), it powered by a Li-Ion 3600 non-removable battery.

Samsung galaxy a7 (2017) camera is magnificent as it packs a 16-megapixel rear camera on the back with tracking autofocus, face detection, geo-tagging and a 16-megapixel front camera for selfies. samsung galaxy a7 colors ranges from Black Sky, Blue Mist,  Peach Cloud and Gold Sand.
Samsung Galaxy A7 (2017)  has a dual SIM slot(GSM and GSM)  which can also accept Nano-SIM for the two slots. Connectivity includes Wi-Fi, Bluetooth, GPS, NFC, 3G, 4G and LTE.