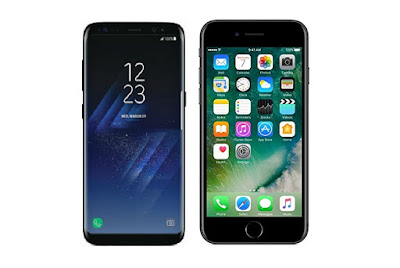 Samsung Galaxy S8, launched on the first quarter of the year took over the global phone market by storm, bringing with it a great design, powerful specifications and plenty of new features but how does it compare to the iPhone 7.

Many comments and thoughts has it that the latest Samsung Flagship was designed to rebuild the consumer confidence and rival Apple’s dominance in the phone market. we have put together a comparison of iPhone 7 And the Galaxy S8 to help you decide which one is the best.

iPhone 7 is slightly slimmer and lighter than Galaxy S8: The iPhone 7 quite a bit smaller than the Galaxy S8, but it’s still as easy to hold in the hand and use one-handed as the device from Apple.

Still, the iPhone 7 is the more compact phone. It’s also one of the best-looking phones around – but the Galaxy S8 is also in that category.

The Galaxy S8 also has the benefit of a microSD slot supporting up to 256GB through memoery card expansion, a 3.5mm headphone jack and having better IP68 water and dust resistance than the IP67 certification on the iPhone 7.

Apple and Samsung both are exceptional in their smartphone camera capabilities. These guys are out of this planet.

The S8 comes with a 12MP Duo Pixel back camera with a face detection, autofocus, optical image stabilization & f/1.7 aperture. It also offers multi-frame image processing, which means the S8 snaps three pictures and uses all the information to create one better, more detailed final image. The front-facing camera on the S8 has an 8-megapixel resolution with an f/1.7 aperture and autofocus over fixed focus.

iPhone 7 has a 12-megapixel rear camera too with a slightly narrower aperture of f/1.8. It too has optical image stabilization, along with plenty of features including a Quad-LED True Tone flash. The front-facing camera resolution sits at 7-megapixels with a f/2.2 aperture, a Retina Flash and auto image stabilization.

The Galaxy S8’s front-facing camera is also slightly more capable, with an 8MP sensor, where the iPhone 7’s is 7MP.

The OS supremacy of these two masterpiece are mind blowing, with the Samsung Galaxy S8 running on Android 7.0 Nougat with the TouchWiz interface while the iPhone 7 runs on iOS 10.3.

The Galaxy S8 is confirmed to ship with 4GB of RAM, while the iPhone 7 is the most grunt-worthy handset from Apple yet, with its Apple A10 Fusion chip and 2GB of RAM.

Samsung’s previous smartphone had its cry of battery and power life as users complain on how they come with low battery capacity  the Galaxy S8 lasts much longer on a single charge than iPhone 7 Plus. The Samsung Galaxy S8 has a 3,000mAh battery compared to iPhone 7’s 1,960mAh battery.

The Galaxy S8 supports fast charging. The iPhone 7 can also charge quickly, but only if you plug it in to a 2.1A iPad charger.