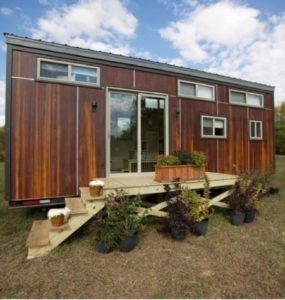 Tiny houses are social and architectural movements where people downsize the space they live in. A regular home is around 2,600 square feet while the typical small or tiny house is between 100 to 400 square feet.

Tiny homes come in all shapes and sizes and some are built on trailers so that they can move around, while others are stationed on a property/lot. However, they all enable simpler living in a smaller more efficient space.

Tiny Houses are usually able to encompass a bathroom, kitchen, living area and a sleeping loft. People are moving into tiny houses for many reasons such as due to financial concerns, environmental concerns or the desire for more time and freedom.

Tiny homes leave a smaller carbon footprint than a typical home, and cost a fraction to maintain. People that have owned tiny houses say that focusing on a simpler way of living and reducing their financial burden have positively impacted their lives in a big way.

During the financial crisis that occurred in 2007-2008, the tiny house movement attracted a lot of attention as it offers housing that is more affordable and ecological-friendly. For thousands who lost their homes due to foreclosure or unemployment, tiny houses became an attractive option.

Tiny houses are also used as dwelling units (or ADU), to serve as additional property housing for aging relatives or returning children, as a home or office, or as a guest house.

In 2013, an Alliance of tiny house builders was formed to promote ethical business practices and offer guidelines for construction of tiny house on wheels. In 2015, the non-profit American Tiny House Association was formed to promote tiny houses as a viable and formally acceptable dwelling option and to work with local government agencies to discuss zoning and coding regulations that can reduce the obstacles to tiny living.

One of the biggest obstacles to growth of the tiny house movement is the difficulty in finding a place to live in one. In some countries zoning regulations typically specify a minimum square footage for new construction on a foundation, and for tiny houses on wheels, parking on one’s own land may be prohibited by local regulations.

Tiny houses are considered RVs and not suitable for permanent residence according to the RVIA. In 2014, the first, “tiny house friendly town” was declared in Spur, Texas, it was however clarified that a tiny house may not be on wheels but must be secured to a foundation.

Smaller houses are less expensive than larger ones in terms of taxes and building, heating, maintenance, and repair costs. The lower cost of living may be advantageous to those of 55 years and over with little savings. In addition to costing less, small houses may encourage a less cluttered and simpler lifestyle and reduce ecological impacts for their residents.

As small houses may be attractive as second homes or retirement houses their increased utilization may lead to development of more land. People interested in building a small home can encounter institutional ‘discrimination’ when building codes require minimum size well above the size of a home.

Neighbors maybe hostile because they fear negative impacts on their property values.

Tiny houses have received increasing media coverage including a serial television show, Tiny House Nation, in 2014 and Tiny House Hunters. The possibility of building one’s own home fueled the movement, particularly for tiny houses on wheels.

Tiny house on wheels (THOW) are often compared to RVs. However tiny houses are built to last as long as traditional homes, use traditional building techniques and materials and are aesthetically similar to larger homes.